The group decided to head out to do their own thing in Jerusalem. Some of the group had, instead of Masada, headed back to Bethlehem and a tour of Christian sites in Palestine and highly recommended the tour guide. Four of us agreed and made a call to the Bethlehem Catholic University. A guide was arranged and we were met at the hotel by a van to transport us over the border and back to Bethlehem. 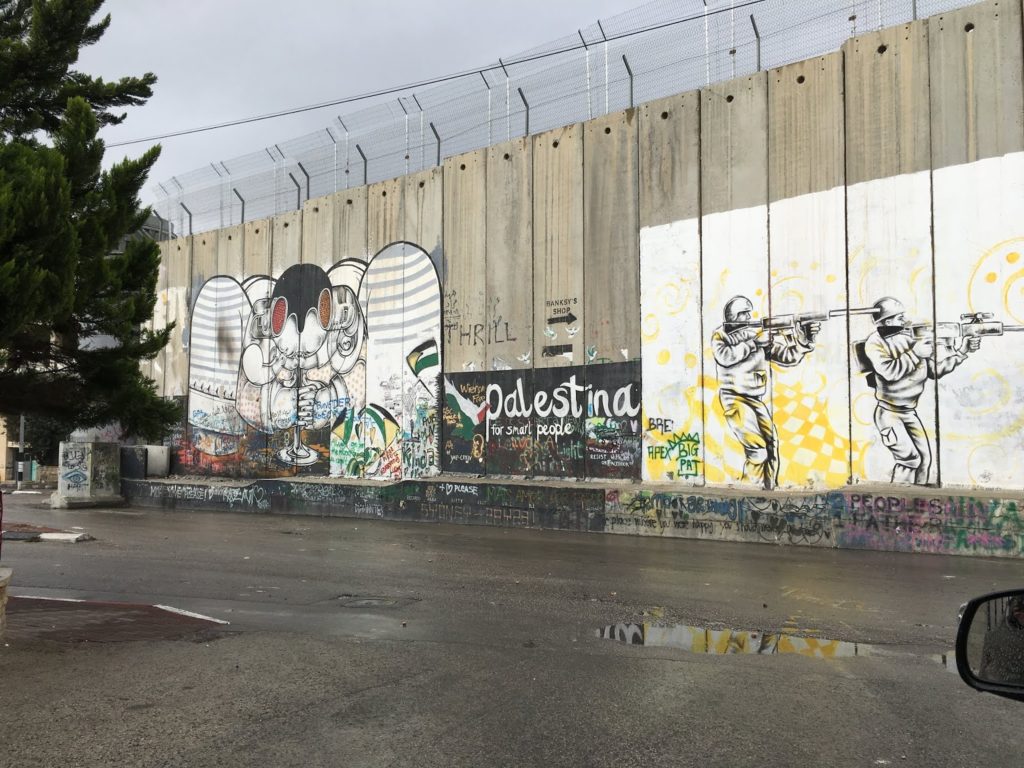 We started out by travelling to an alternative birthplace for Jesus, a small cave and alter and a view up the hill to Jerusalem. 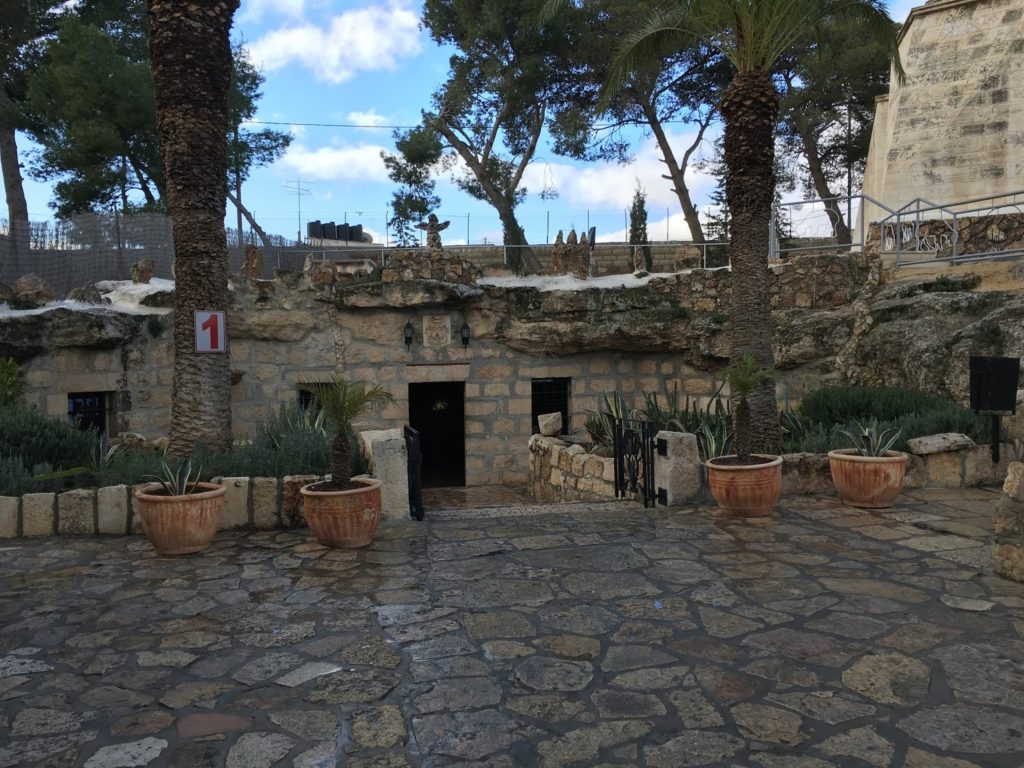 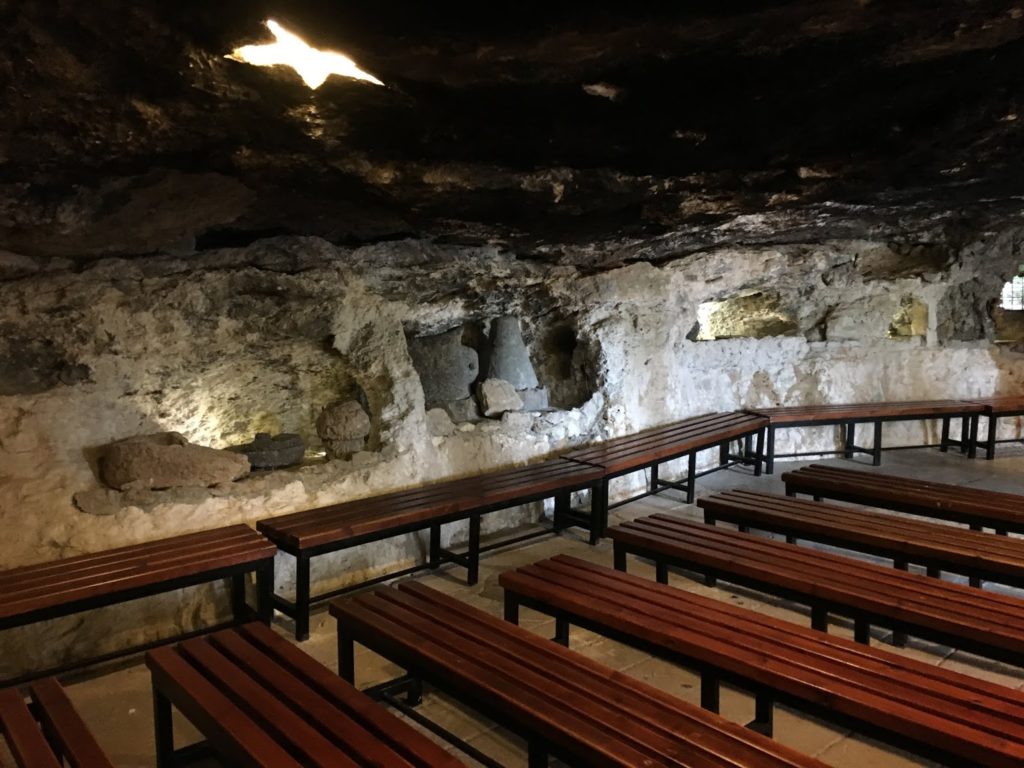 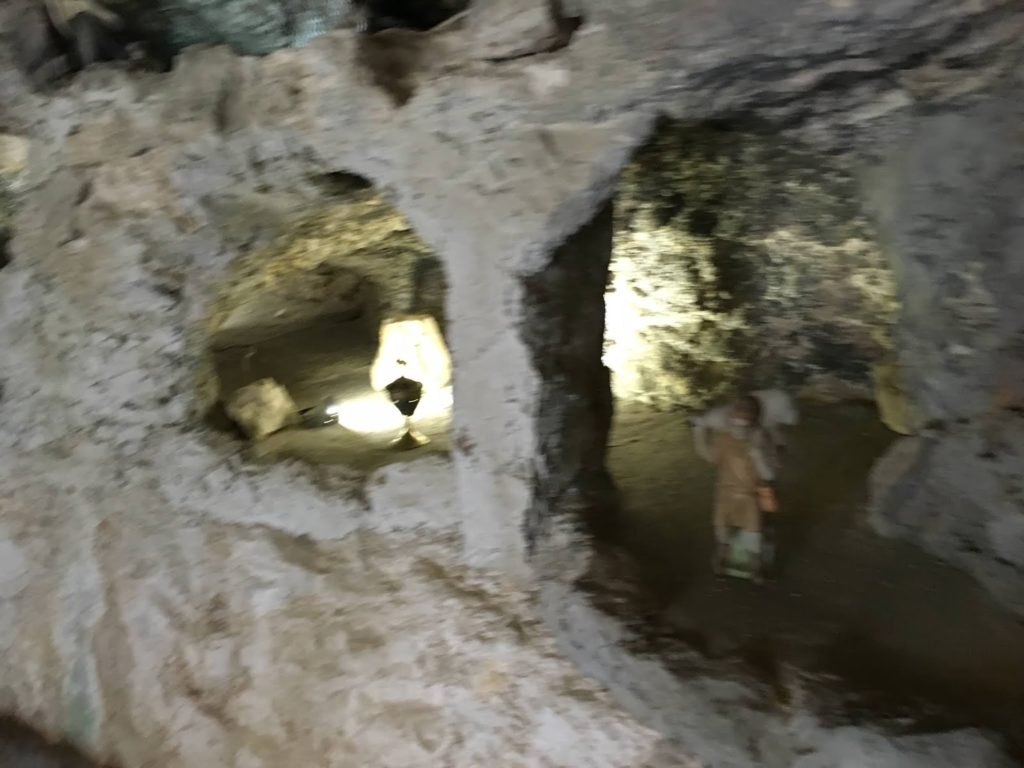 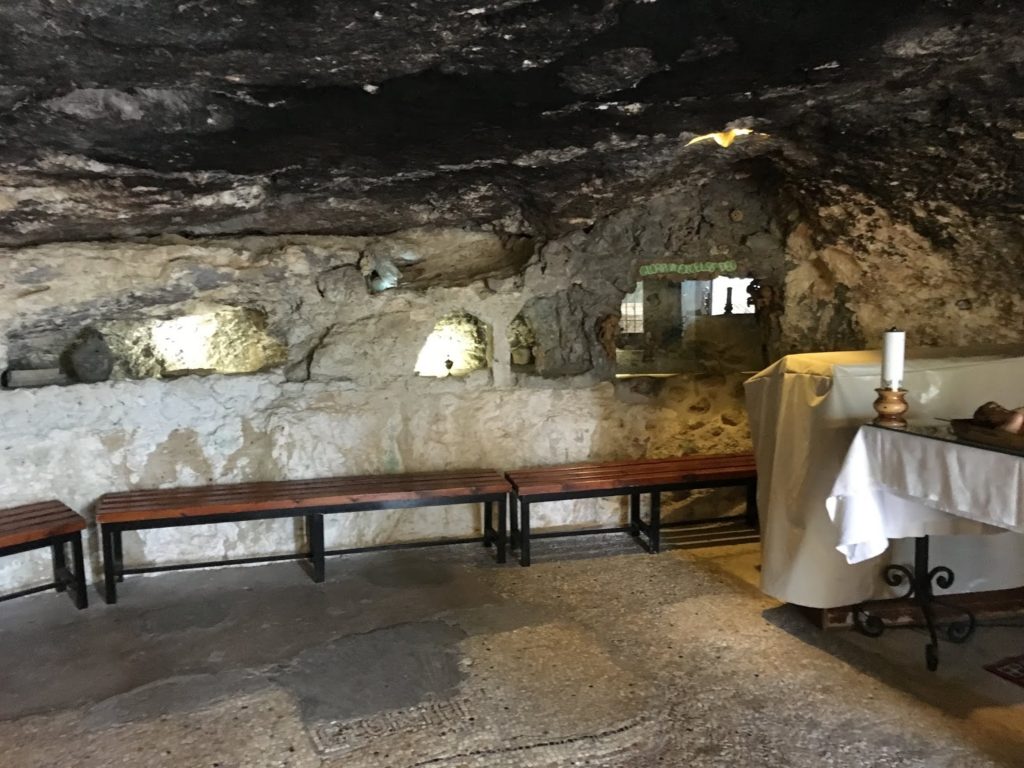 Our guide pointed out a hotel under construction in the no mans land between Bethlehem and Jerusalem, the shining city on the hill. That’s not a metaphor for this region. 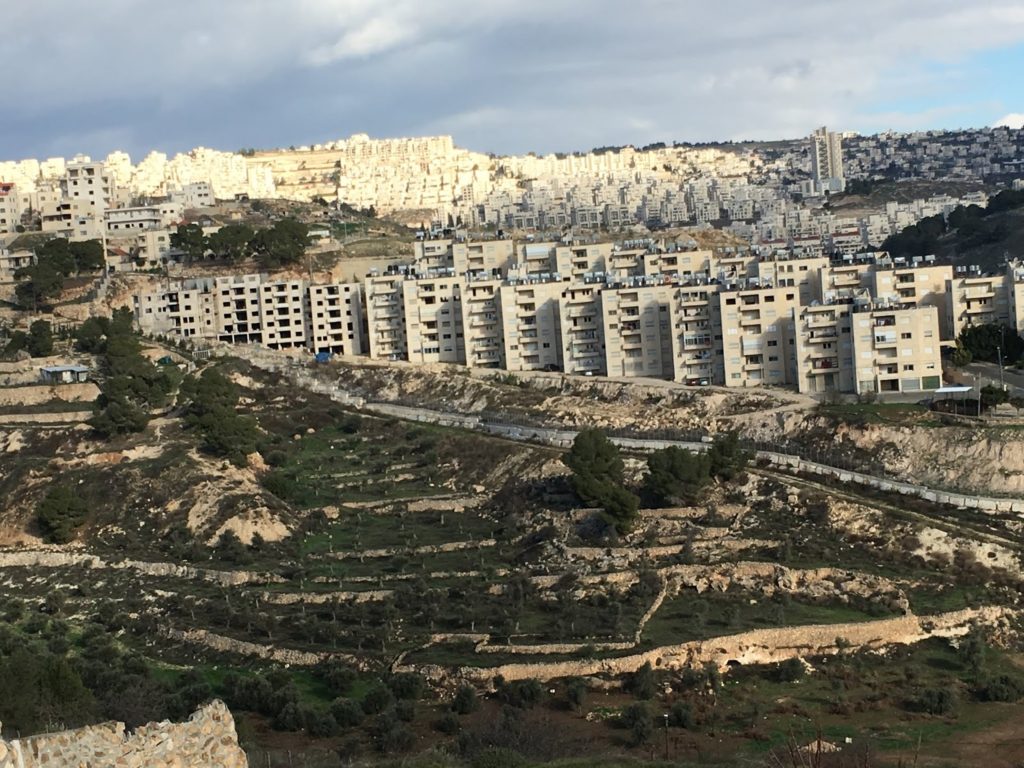 This would be one of many quasi-legal or illegal developments that the Palestinians had issue with. His issue, personally, was that the hotel would undercut christian stays in Palestinian owned hotels in Bethlehem, further exacerbating the tensions between the Christians and the Jews, something no one wants.

Next we went to the recently located elaborate palace fortress, and burial site, of King Herod. 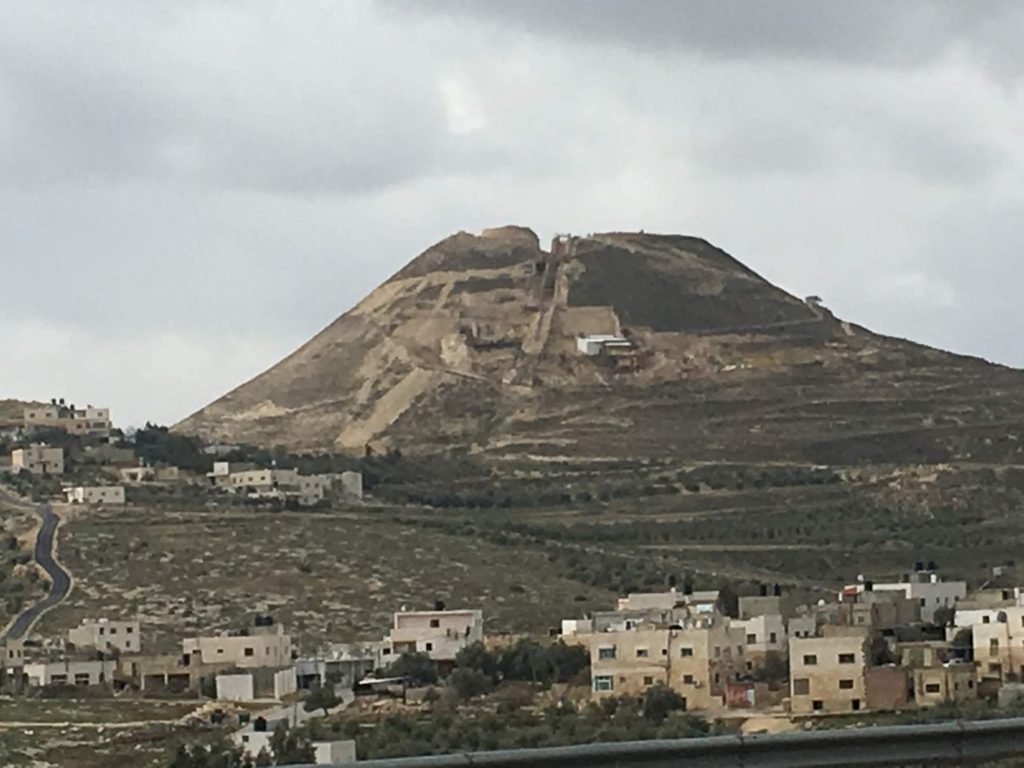 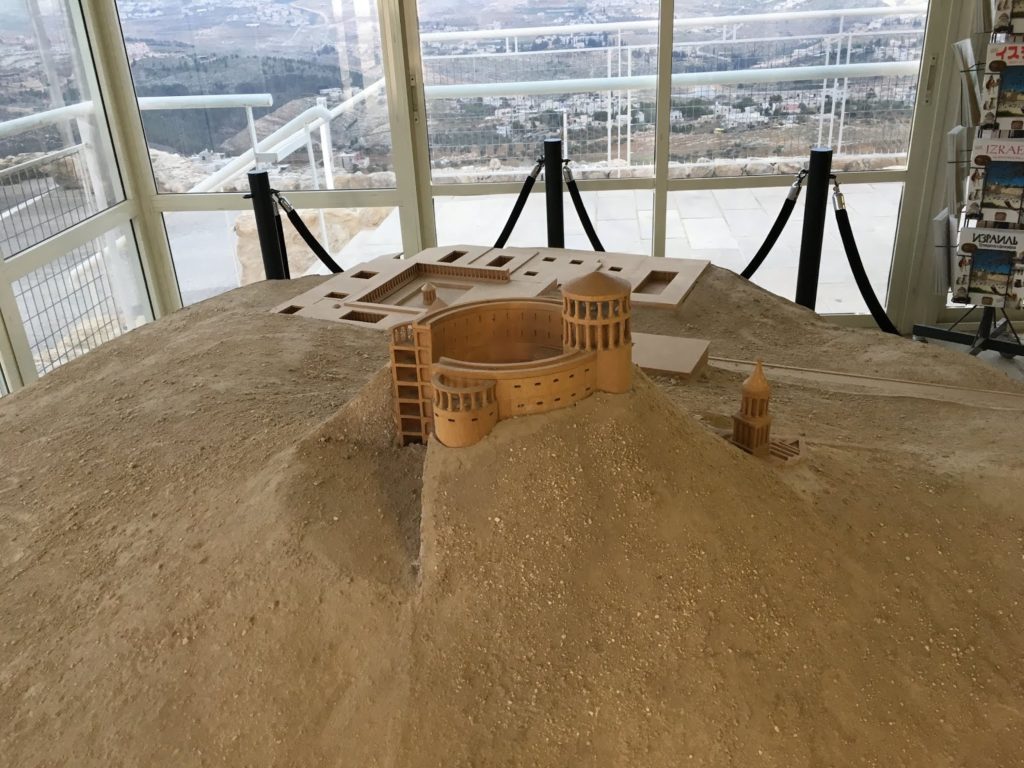 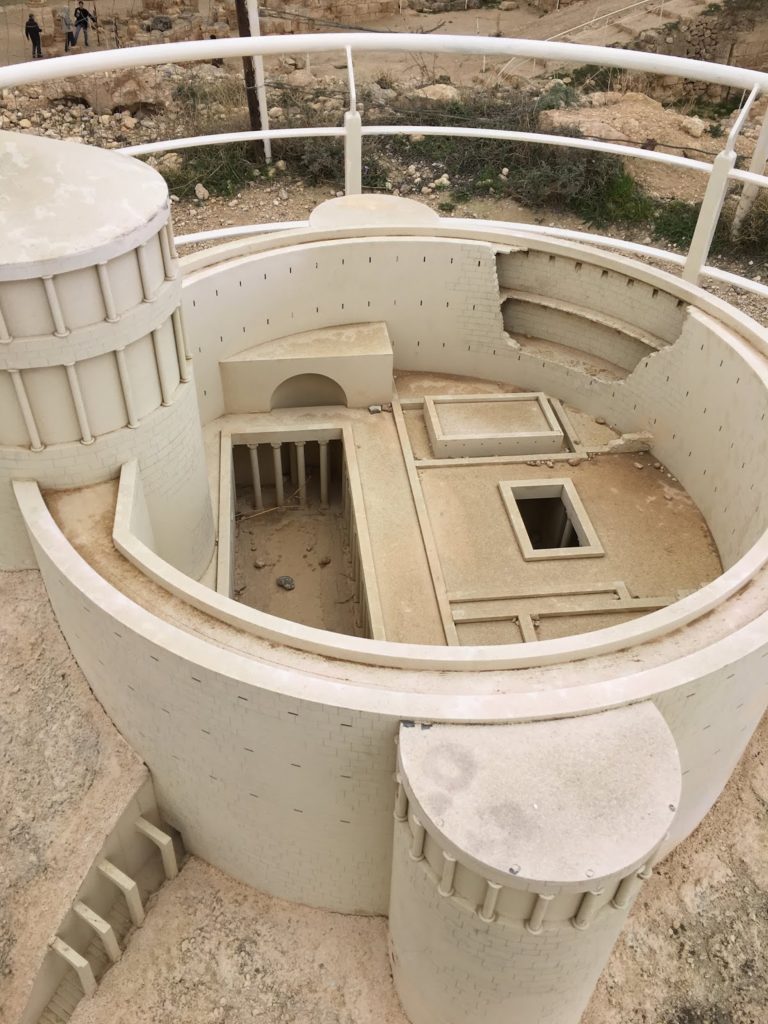 While the excavation found a royal burial tomb, and DNA testing has shown that the people in the tomb were relatives of Herod’s, it is believed that it might be a flagrant bait and switch and his real tomb is elsewhere to prevent body snatching and defiling.

Interestingly enough, the tomb faces directly toward Bethlehem. Archeologists are not sure if that was placement or intentional insult.

From the top it is possible to see up to Jerusalem, Bethlehem, and the surrounding towns and valleys, including settlements. The explanation from our guide was this: 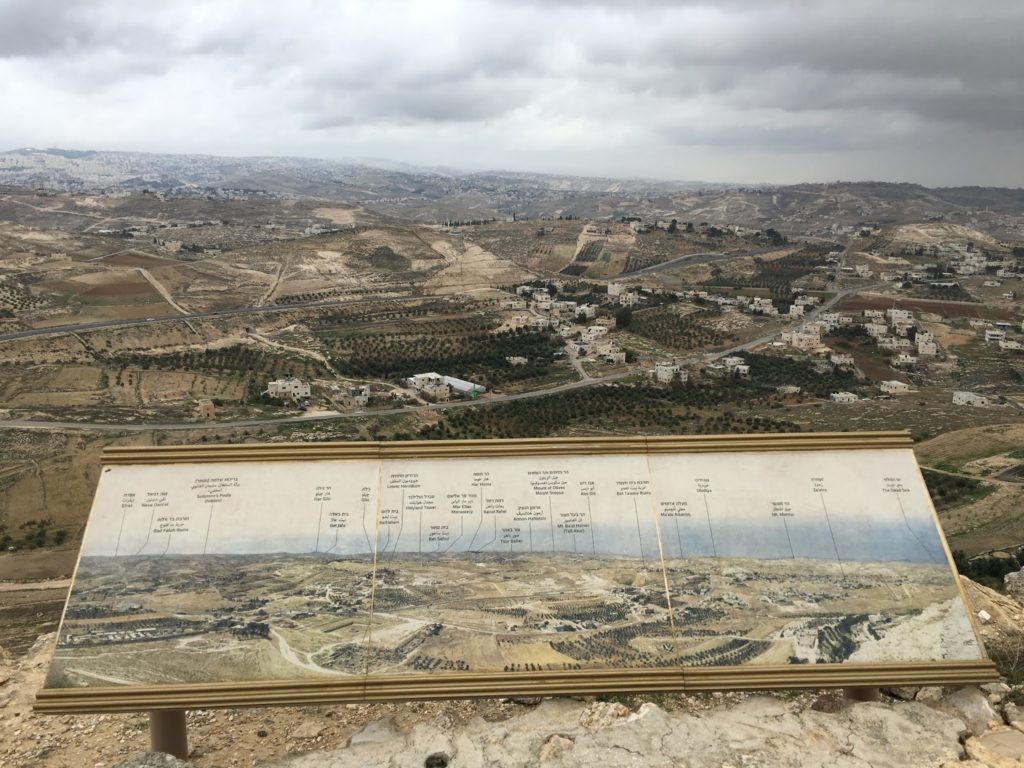 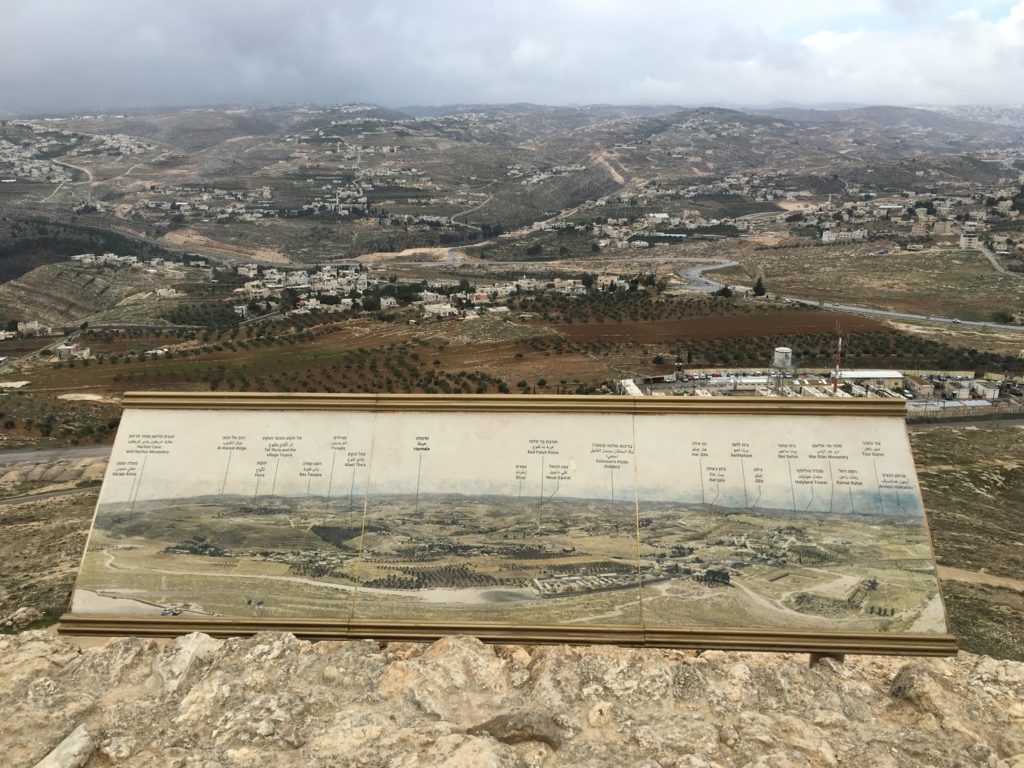 In the time of the Ottoman Empire taxes were paid based on how much land you owned. So the locals got together and kept two “books.” One they reported to the Ottomans claiming little land personally and disclaiming much of the land around towns or homes. The second was the accurate accounting for who owned what.

When the British took over from the Ottomans the locals attempted to approach the British with the accurate land owner records, but the British refused and said they would honor the Ottoman records. This meant that thousands of people last the rights to ancestral land over which there was no argument, creating these “dead zones” between towns and settlements.

Next we traveled through al-Eizariya (the place of the Tomb of Lazerous) without stopping. The city is, unfortunately, run down and dirty, with sidewalk salesmen hawking well-used appliances and a significant drug issue.

We continued on a highway that went around Jerusalem , constructed by the United States (and sporting American flags on each light pole) until we arrived at the parking lot for St. George Orthodox Ministry. 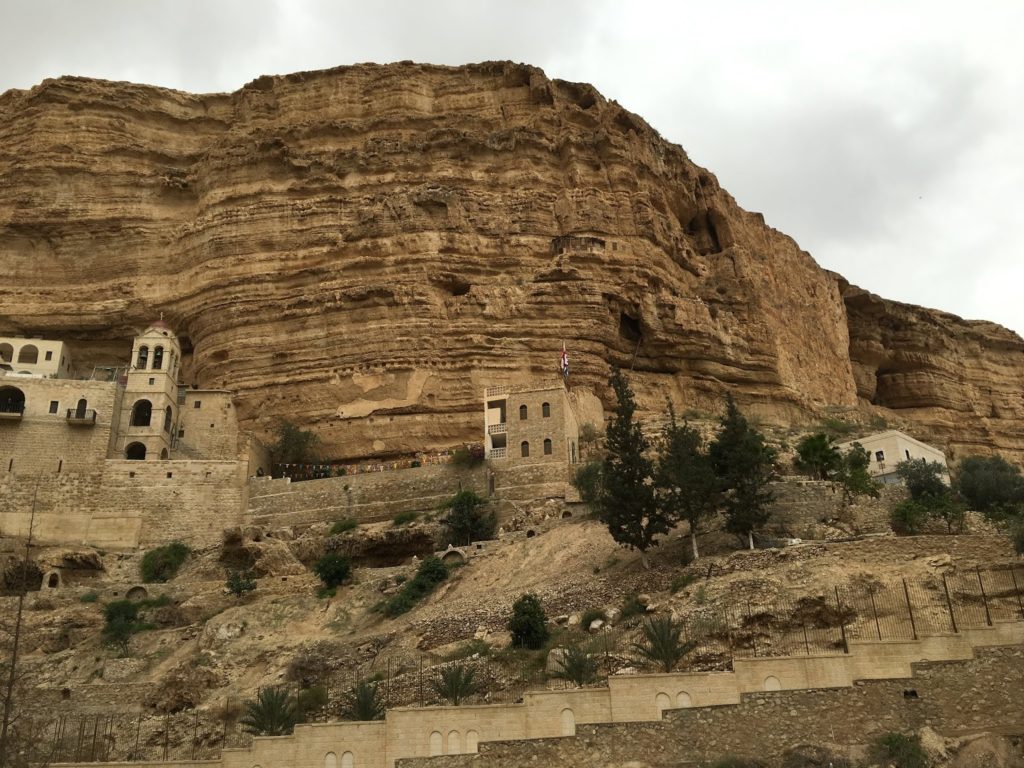 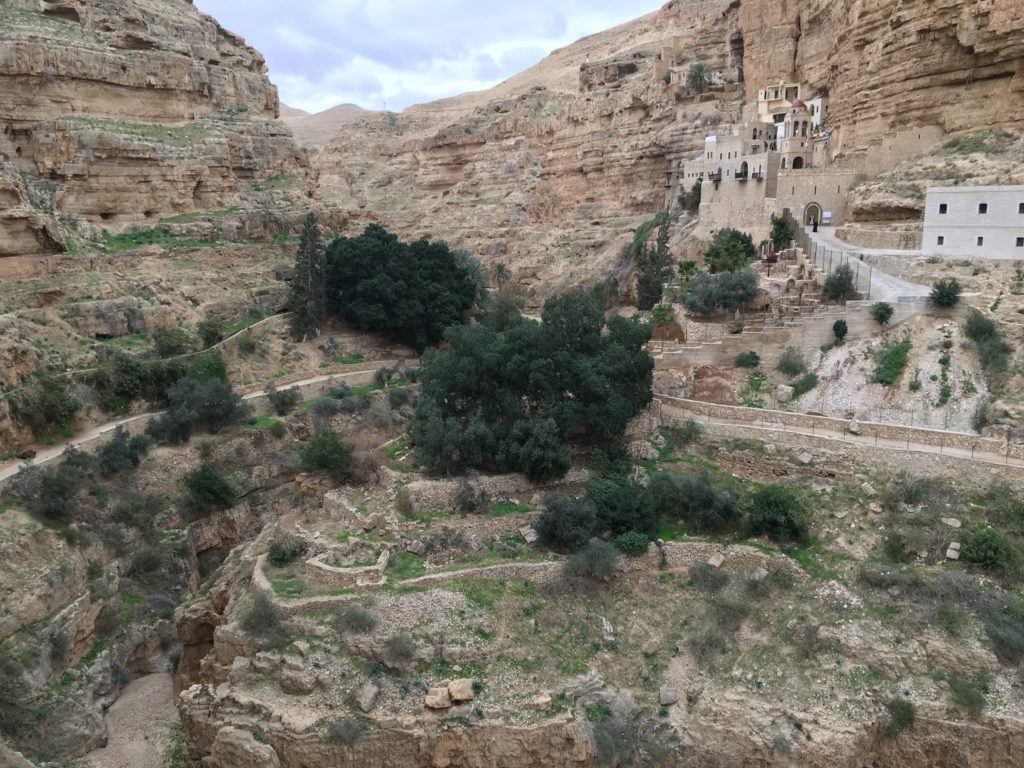 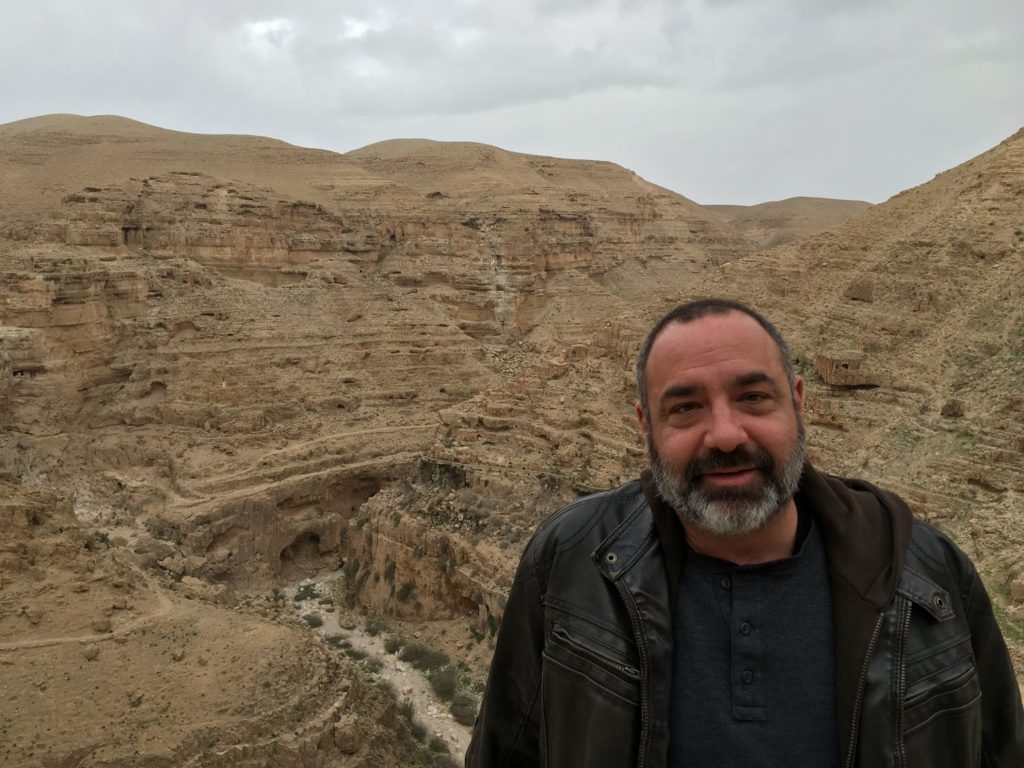 Clinging precariously to a cliff face, and across from a water supply channel constructed by, wait for it, King Herod (that still carries water to this day) we made the trek down and back up to the gate 30 minutes before close. Only to have a priest meet us at the gate to tell us we the monastery was closed for the observance of a celebration. Disappointed, we were about to turn back when one of our group asked to try and, in flawless Greek, began a conversation. The priest relented to both the request in his native tongue and by a member of the Greek Orthodox church and we were able to tour both chapels and the cave where Elijah was fed by ravens while in exile. 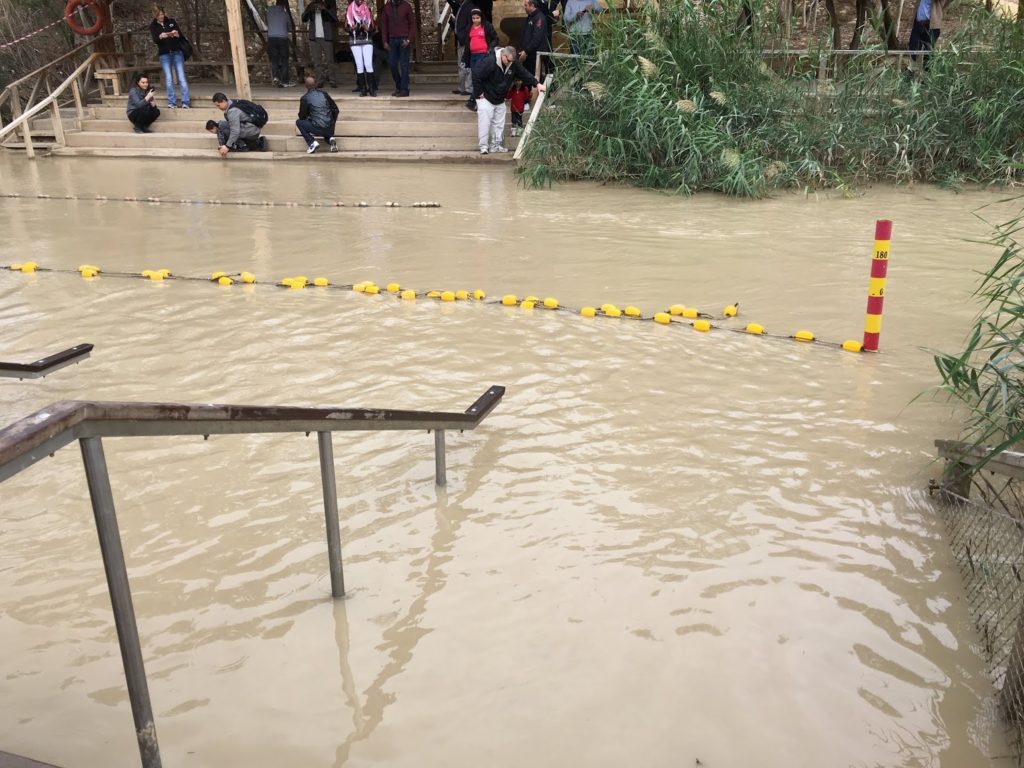 We then headed down to the Jordan River and the baptism site of Jesus by John. Now River is a grand stretch of the word. Most would probably call it a stream. And as the Nation of Jordan is on the opposite bank, armed soldiers are stationed at the site to ensure that no one is trying to sneak across the border. But it does not diminish the celebrations, party mood, or dancing and music on the staircase leading down to the bank and into the river.

We next headed to Jericho and the Christian quarter for lunch. We passed by a massive hotel/casino complex that was, at one time, very popular but had fallen into disfavor and was now abandoned. 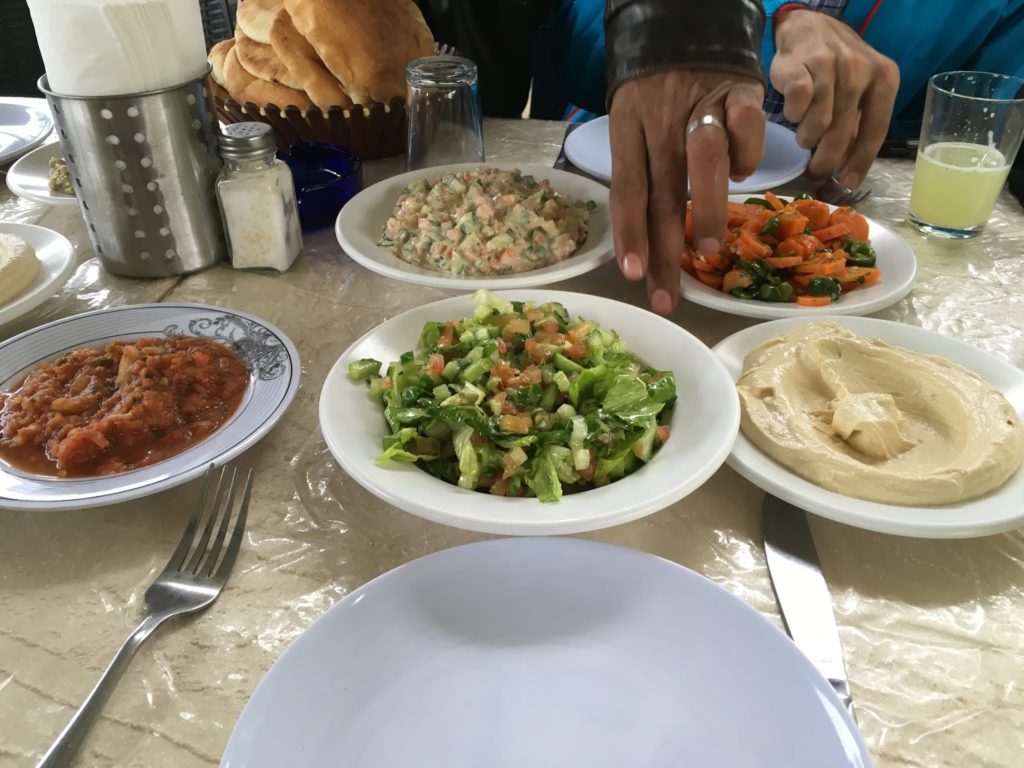 Lunch was amazing, with a slight overlook of the city, in an outdoor garden restaurant. And then off to Hishams Palace for a tour and another thanks for America and our involvement in the archeology and preservation of historic sites in Palestine. It seems to be a friendly race between the United States and Korea as to who is investing more money in the Holy Land. 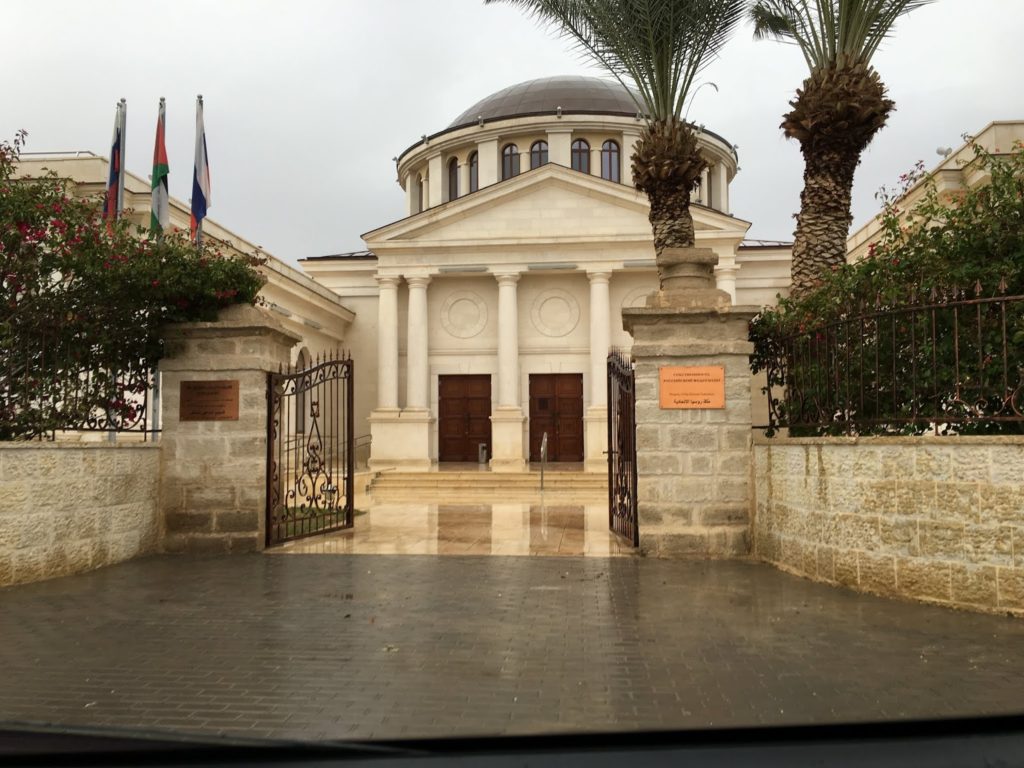 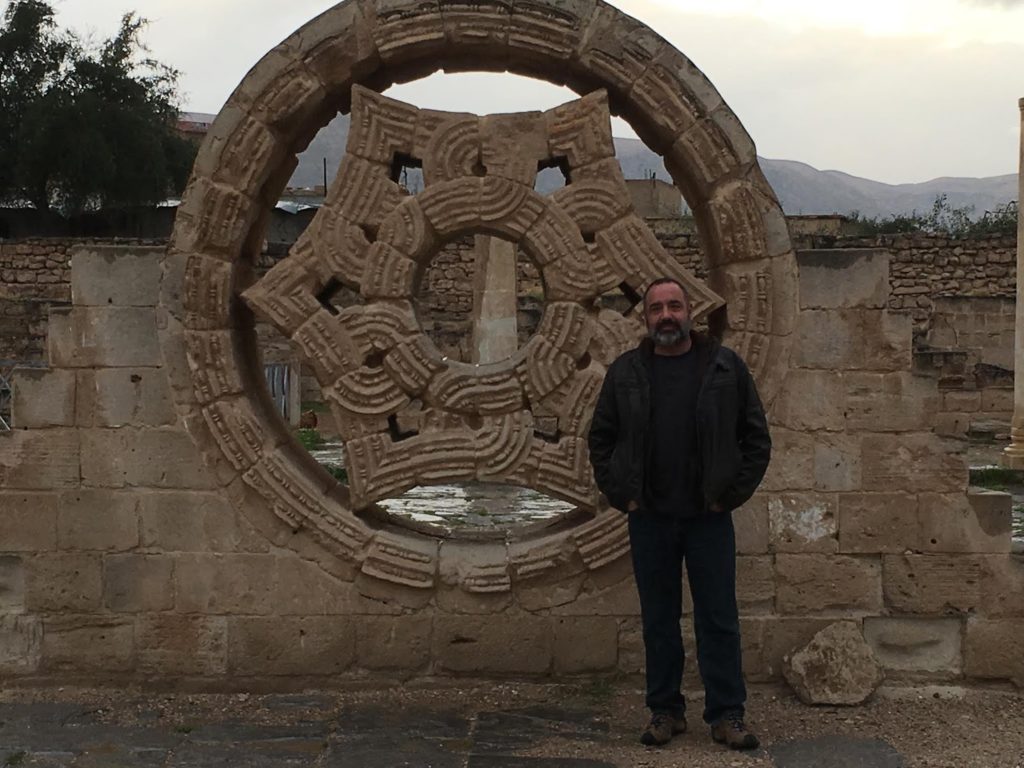 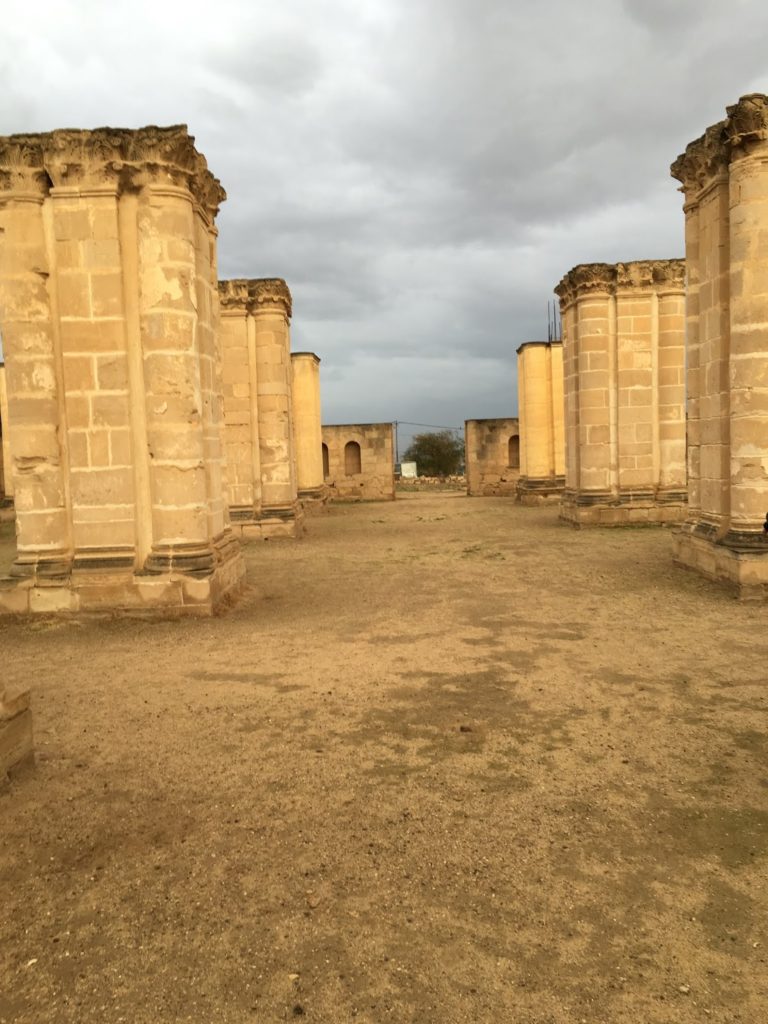 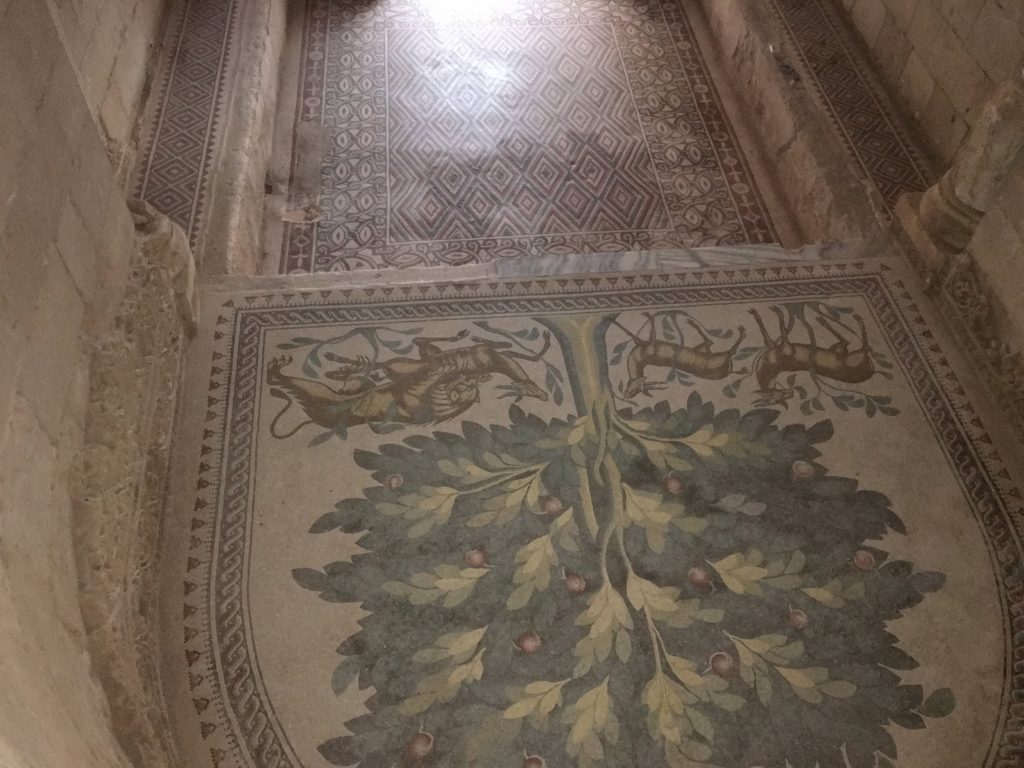 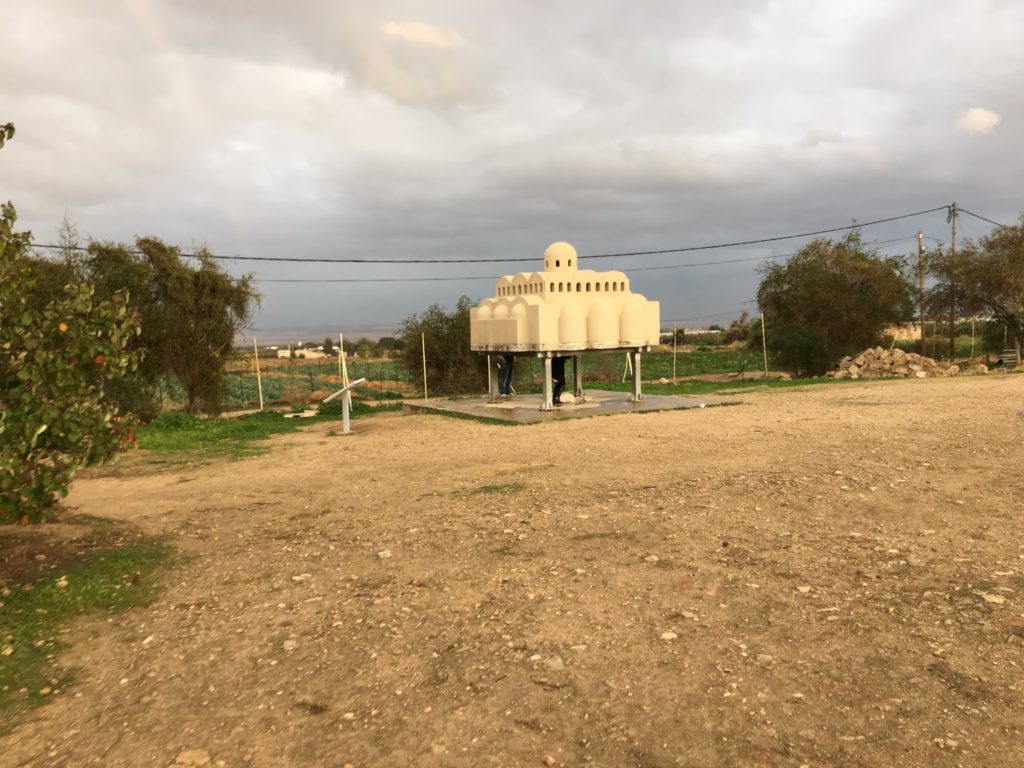 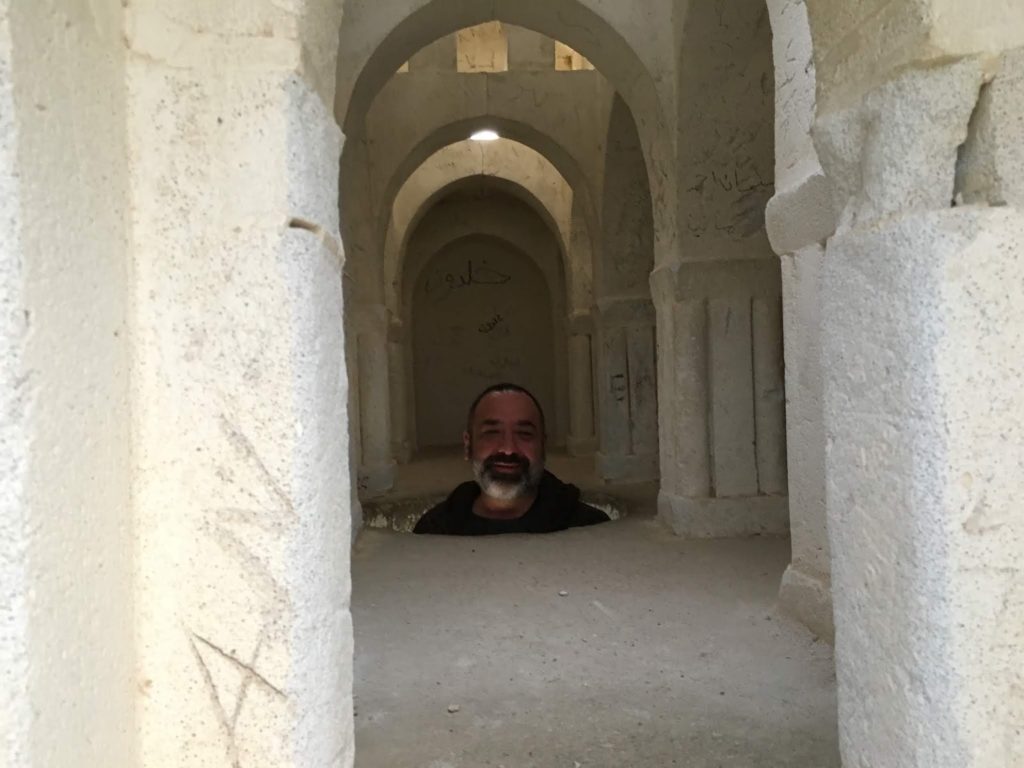 The site was interesting, empty to ourselves, and in a light rain quite pleasant.

Our final stop as night fell was at the Mount of Temptation, which is regarded to be the place where Satan tempted Christ with all kingdoms of the world. The tram to the top was put in by South Korea, so they win that round. And closed, so we were done for the evening. A quick trip back to Bethlehem, a dessert shop, and then a late night ride back to Jerusalem.