Tel Aviv is a modern international city on the sea. In a country the size of the State of New Jersey, it serves as the flagship of  Israel and all that is possible. Tel Aviv’s promise and energy shows in the shops, the restaurants, the civic structures, and the historic artifacts that abound in the clean, safe, and constantly under development city. And it’s beaches. Which we drove quickly by in the rain. 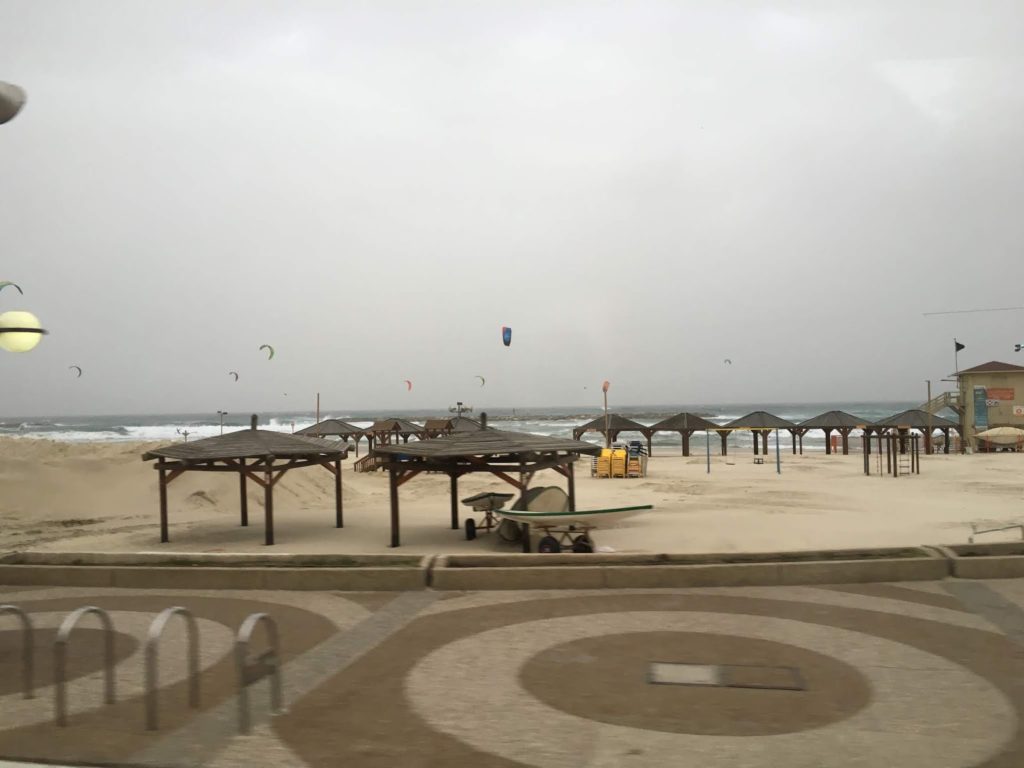 We began the tour in the morning with the Port of Jaffa and an Statue of Faith on a hill in the small town lying at the edge of Tel Aviv. The whole area reeks of permanence and history that you find in few places around the world. Particularly in the United States. 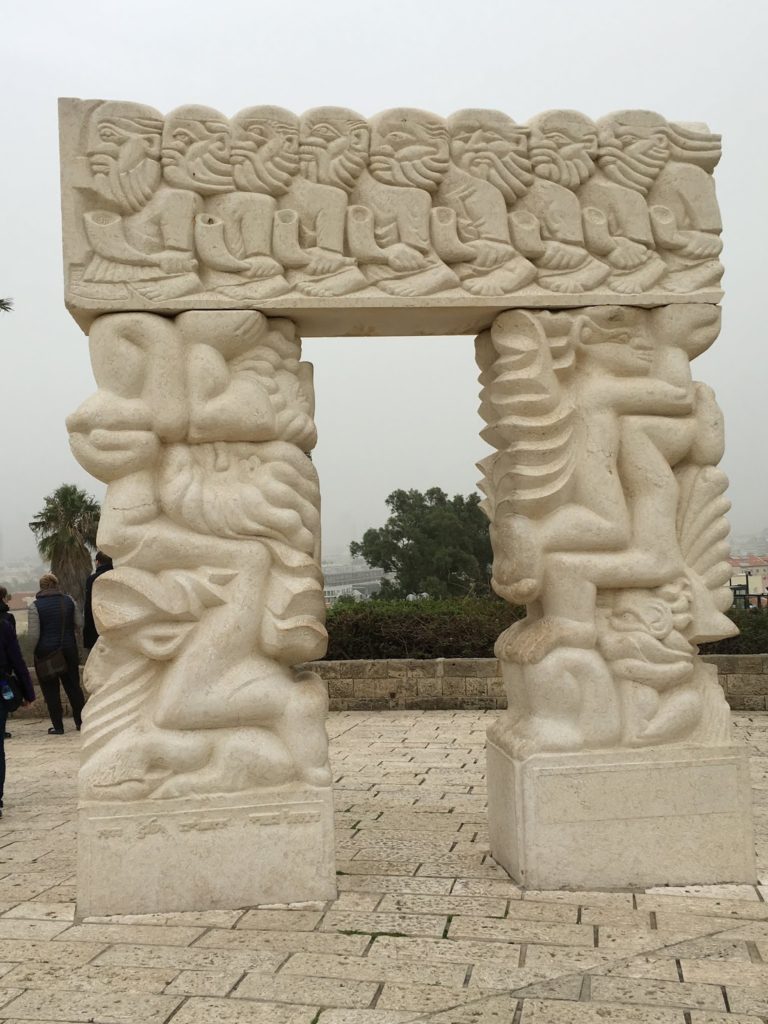 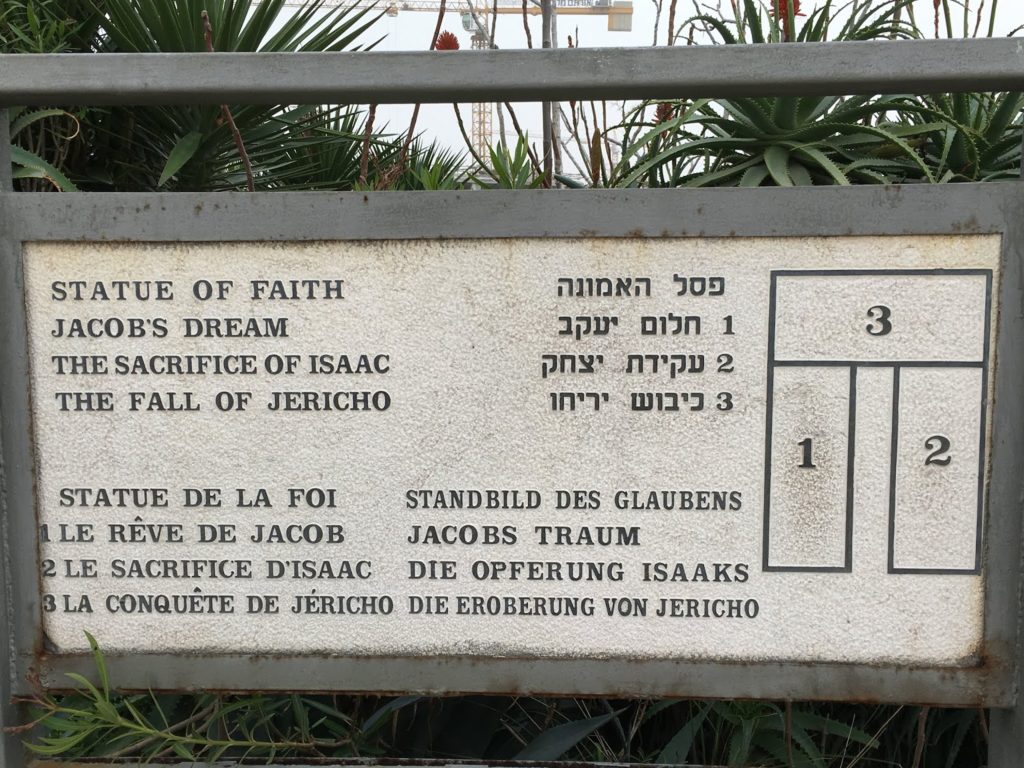 But the legends of Jaffa are far older than Israel itself. The stones of the harbor are said to be the bones of the Kraken turned to stone by the head of Medusa held aloft by Perseus. This is the harbor Jonah sailed from before finding himself as whale chow. The port is more than 4,000 years old.

It is impossible not to be aware that you are standing on a paving stone on a street that may have been here at the same time they were completing the Great Pyramid in Egypt. That pretty much sums Israel up – no matter where you stand, sit, or lie, there are thousands of years of recorded history that involve the small piece of ground where you stand. 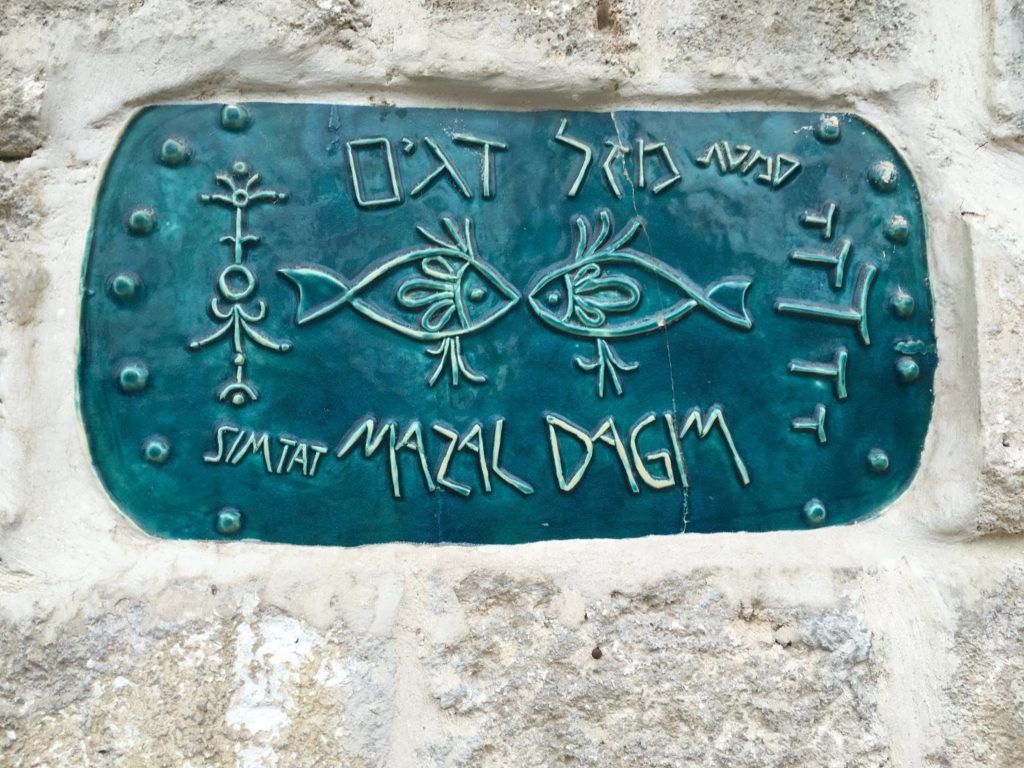 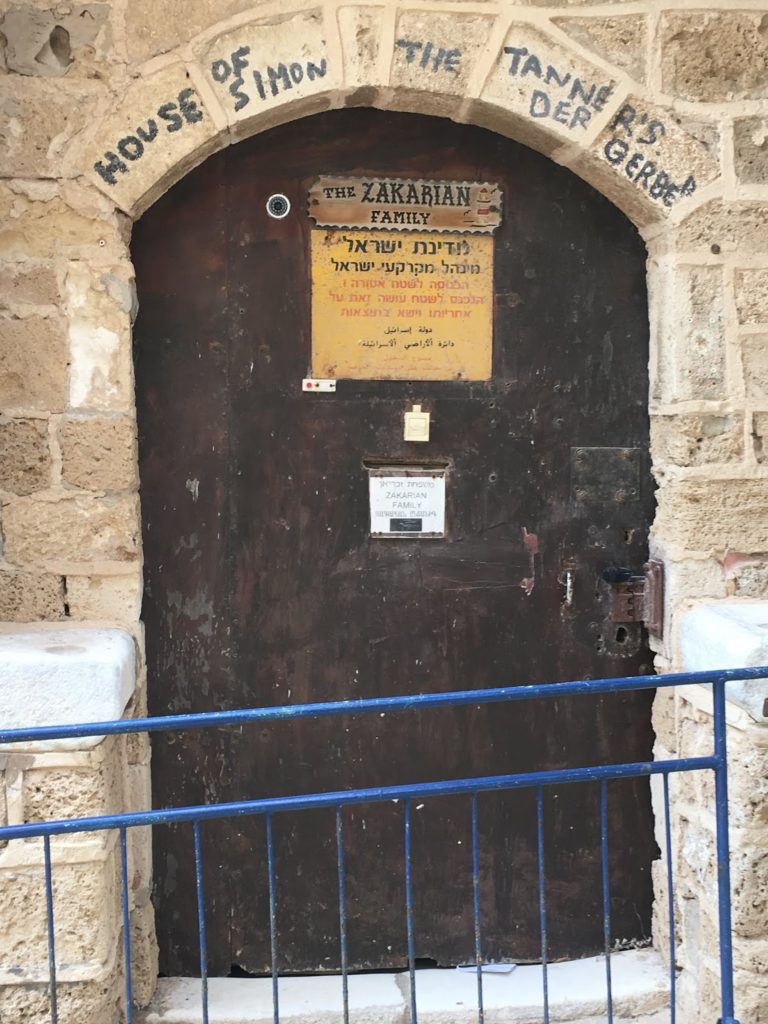 Simon the Tanner owned the home behind this door. He hosted Peter the Apostle, who raised Tabitha from the dead and received a vision saying it was okay to eat animals traditionally unclean in Jewish tradition. This is it. The birthplace of BACON.

Well, he interpreted it to mean he could teach Christian doctrine to non-Jews. So this is also where the world-wide Christian religion began.
But also, BACON. 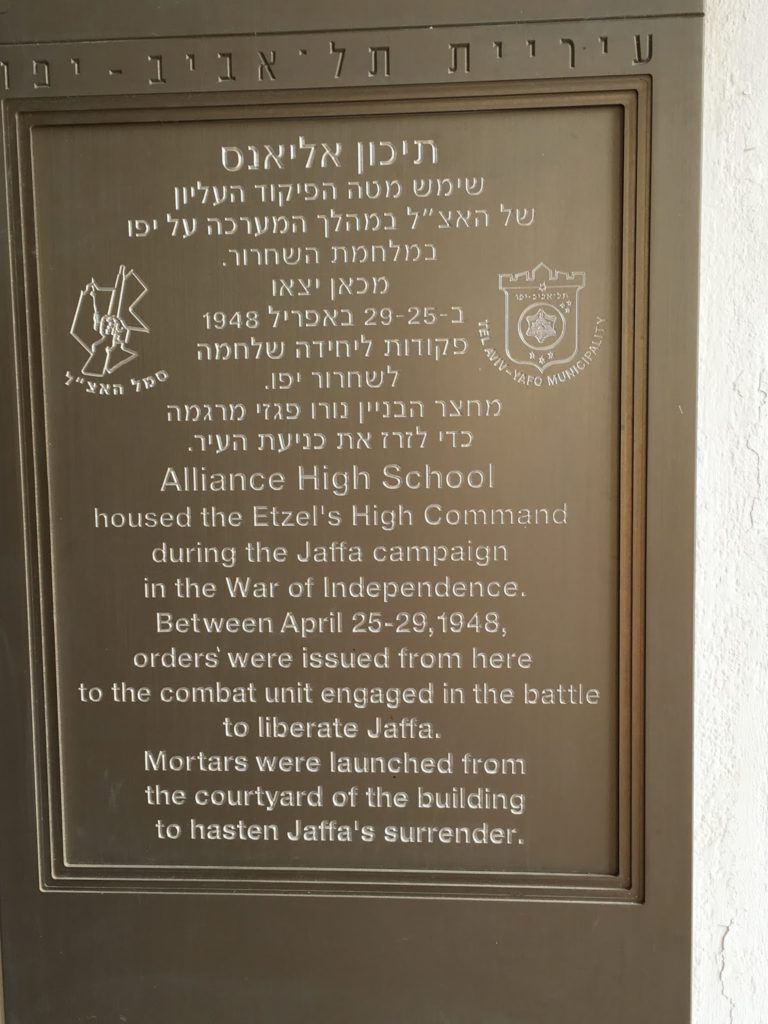 The area around Jaff was originally undeveloped land and swamp. This worthless land was purchased by the emigrating Jews  and developed into neighborhoods. We toured the buildings, heard the history, and learned the origins of Tel Aviv and some of the modern nation of Israel.

Lunch back in Tel Aviv and then we hit the road for Caesarea – our first architectural miracle built by Herod the Great. It has an intact ampitheatre, 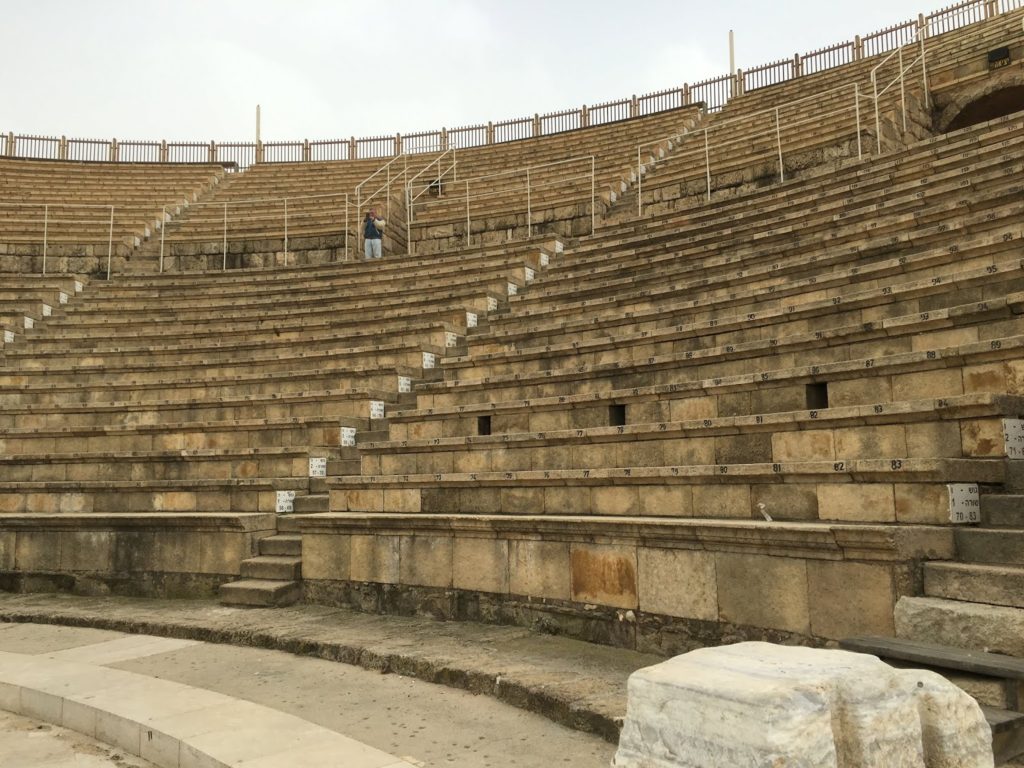 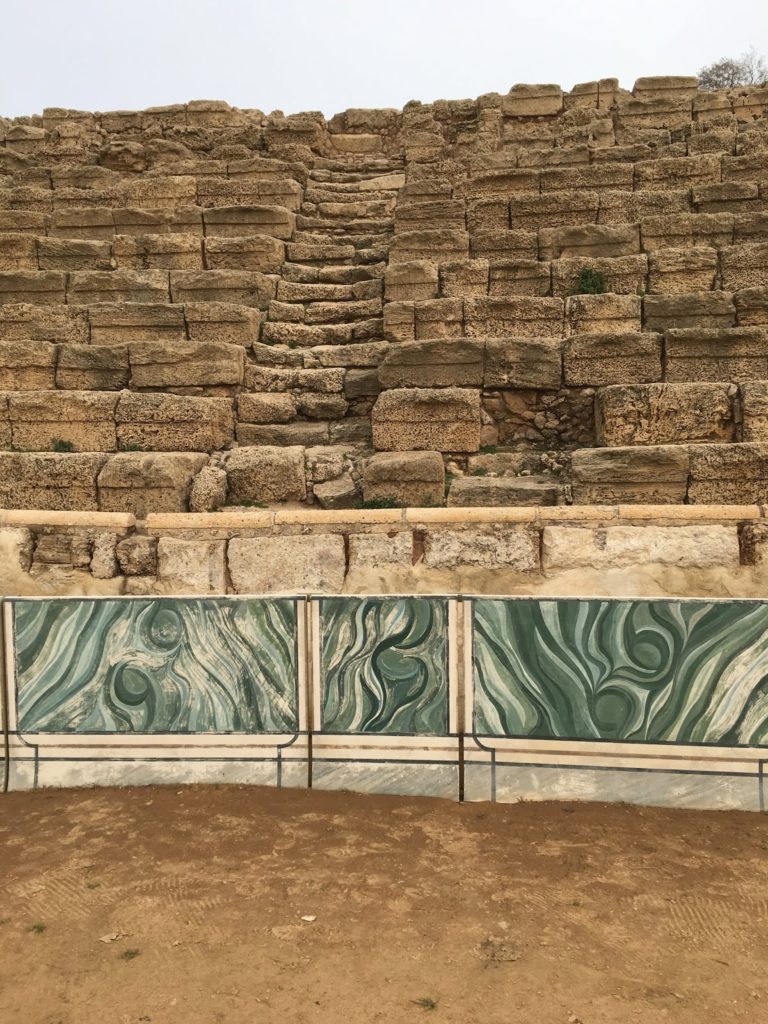 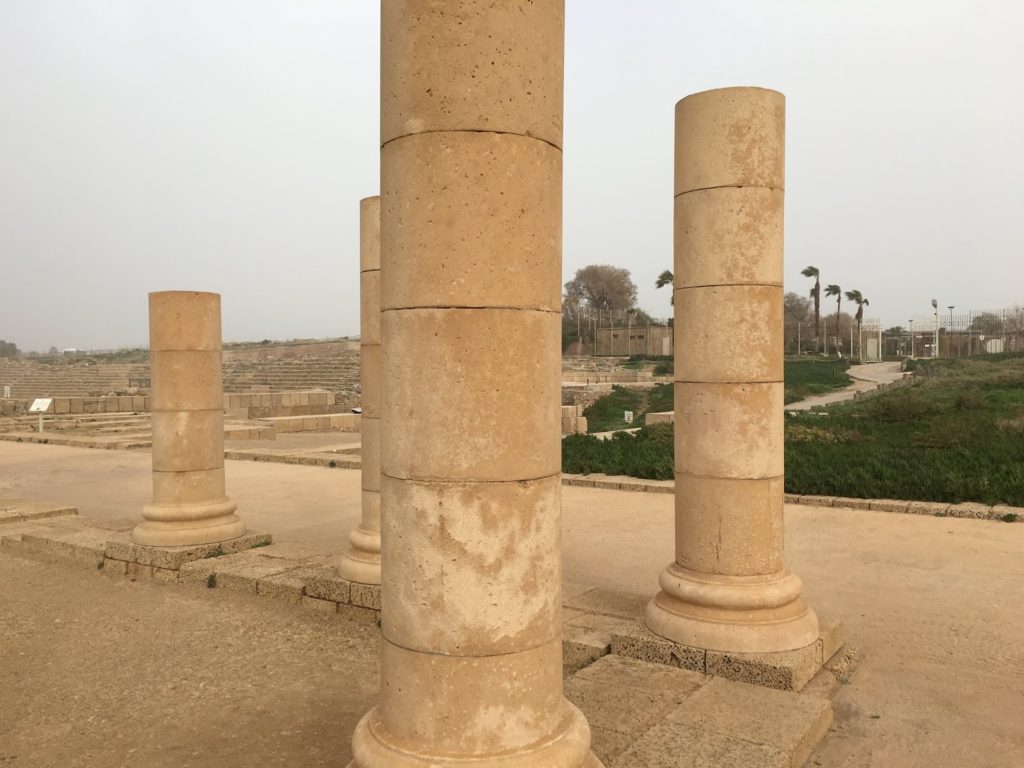 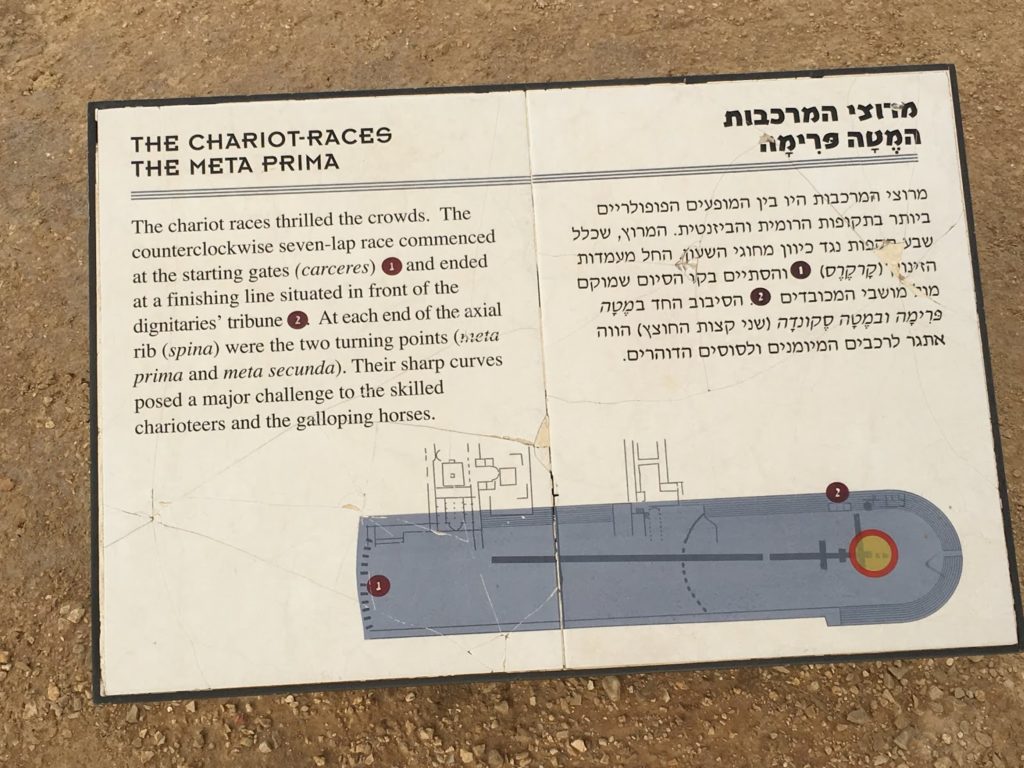 and artifacts you can watch as the sea slowly takes them. 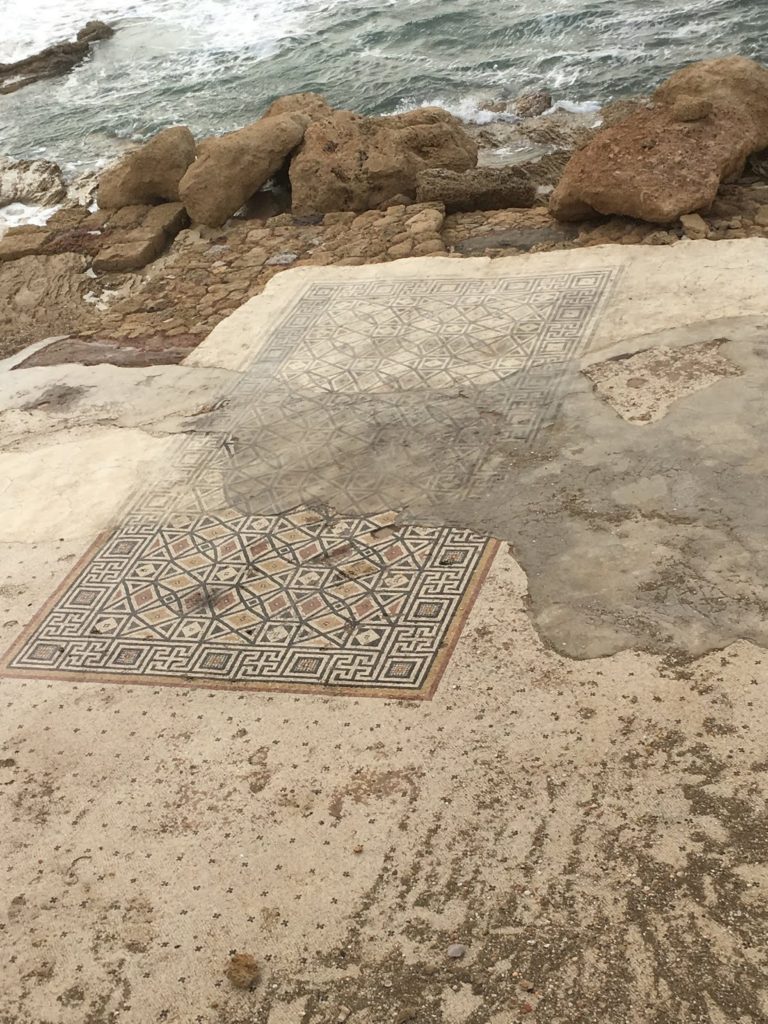 There’s also a gift shop – but this seems kind of half hearted, with a few snacks, some religious material, and t-shirts. It was the first time I’ve ever experienced a kind-of “myeh” approach to tourism. It wasn’t bad, but…is it sad I have high expectations for trinket presentation?

The ruins are old and, if you have any knowledge of Roman history or architecture, fascinating in that they were not built by Romans but to impress Romans. Herod basically out-Romaned the Romans in some respects.

There are even two still standing aquaducts along the beach that can be climbed up and walked, but the are full of sand and trash. Still, it’s amazing to stare down the line into the distance and try to imagine the scope of construction without modern equipment. 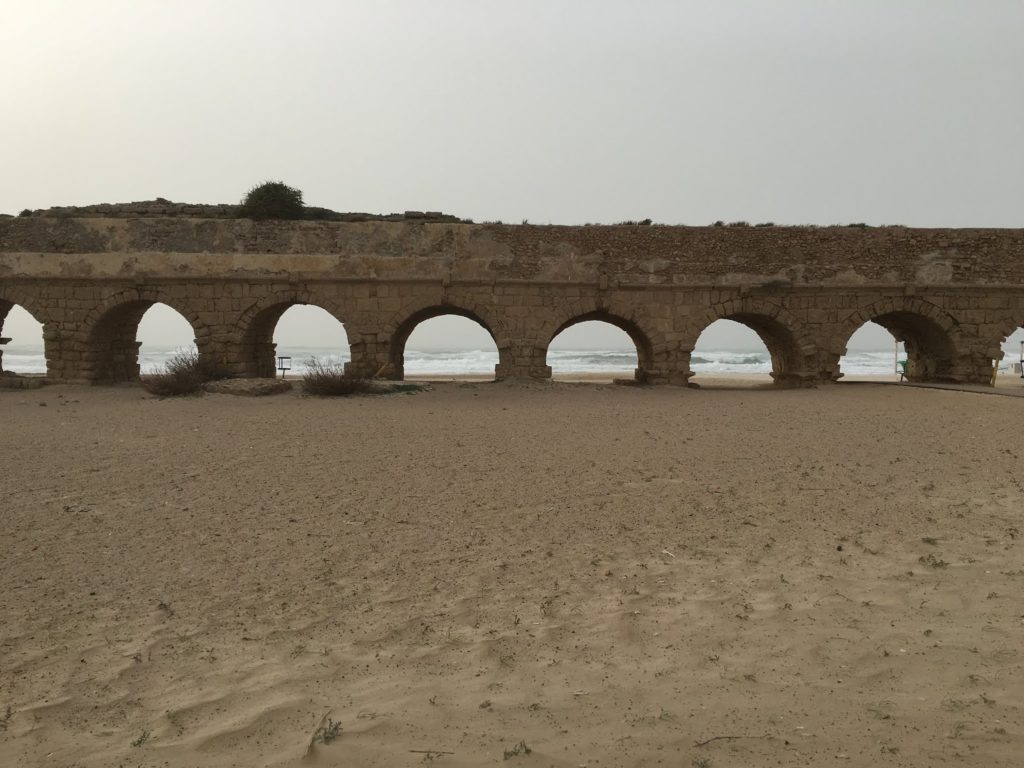 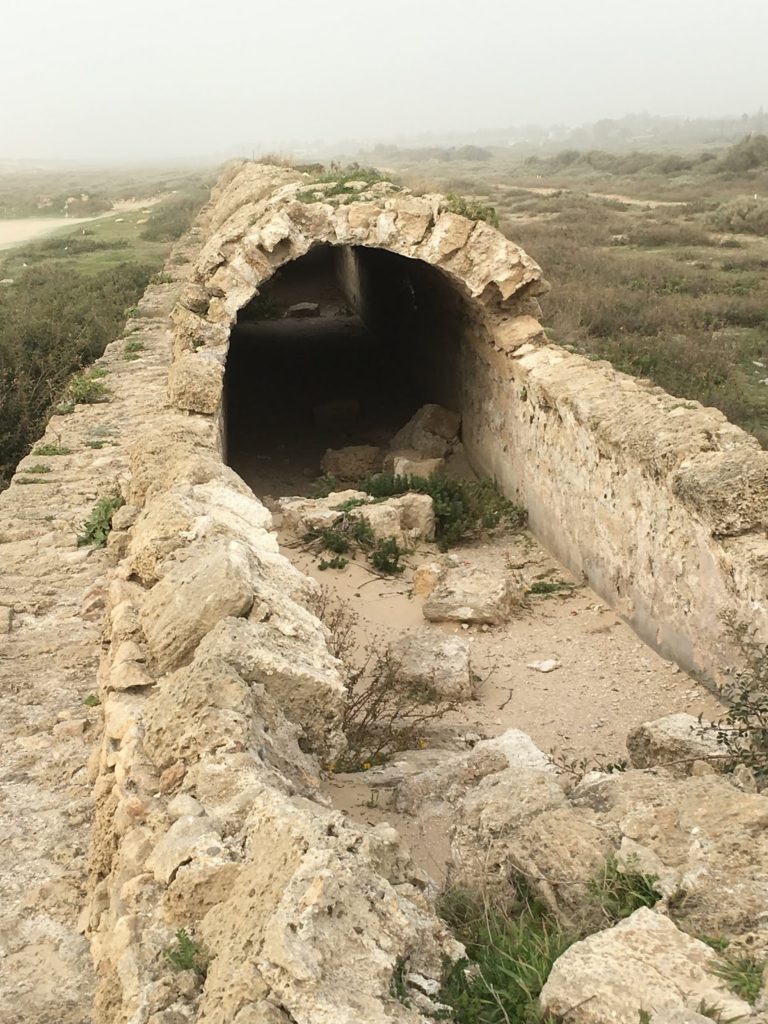 As the sun set, we boarded our bus to travel to Tiberius, the Sea of Galilee, and Kibbutz Maagan Holiday Village.