This is the origin story of the John Flaherty, a ‘wasted genius’ millennial with no interest in anything beyond his couch and video games. His self-designed paradise of laziness is threatened when he and his roommate are attacked by three adventurers seeking to steal a belt buckle left to him by his long lost father. The three, John Masters, a starship captain, Barbara the Valkyrie, a well-endowed woman warrior with wearable worriments, and Cerebus the Aardvark, a 3 ½ foot tall aardvark with a sword and psychotic episodes, are promised a boon if they assist Flaherty in reaching his father. They are guided by the buckle he left to his son that they intend to steal. They travel across dimensions, battling the residents of each, in a quest to reach the final destination and find out who Flaherty’s father is and beat the crap out of him for sending them on the longest escort quest in history. 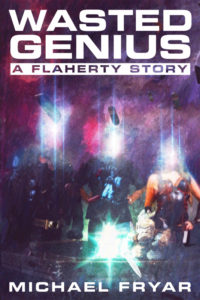